Each year, the Microbiology Society awards a number of Research Visit Grants that enable our members to work in another laboratory anywhere in the world. PhD student Alessandro Lazdins fom the University of Birmingham writes about his trip to Sydney earlier this year, to work on plasmids in mice. 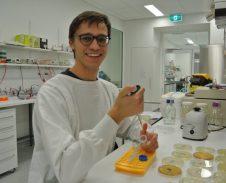 In addition to their chromosomes, many bacteria contain plasmids – small, circular DNA molecules that typically carry advantageous genes, most notably those involved in antibiotic resistance. Plasmids are particularly problematic because they can be easily passed between different bacterial populations by a process called conjugation. This can rapidly spread antibiotic resistance genes in all sorts of environments, from sewage water to the guts of humans and animals.

As a PhD student at the Institute of Microbiology and Infection at the University of Birmingham, I have been studying whether we can eliminate these plasmids from their hosts. This would be particularly useful in clinical settings, where many infections are due to bacteria that are normally found in the guts of patients. If we could remove resistance plasmids from a patient’s gut before an infection develops, then treating that infection would become a lot easier.

Eliminating plasmids from a bacterium is known as ‘curing’. Put simply, our method, known as pCURE, uses specific plasmids that are able to block the replication of target plasmids without affecting their own. pCURE plasmids also neutralise the ‘self-destruct’ systems inside bacteria that cause them to die when they lose one of their own plasmids.

Up until now, pCURE has only been used as a lab method, but my project has developed a version that can spread between bacteria and shows very efficient curing. However, in order to take it closer to a possible clinical application, we wanted to know if we can displace plasmids that are present in the guts of mammals, initially mice. 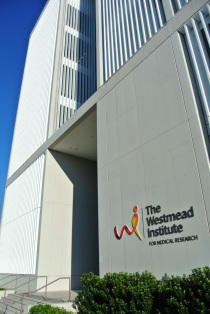 In September 2016, I attended the biennial Plasmid Biology Conference in Cambridge, UK, where I met Professor Jon Iredell from the University of Sydney. Professor Iredell’s group has been working on a different plasmid curing idea and has tested it in mice. At the conference my supervisor discussed the possibility of me going to Sydney to test our pCURE in their mouse set-up. I applied for the Microbiology Society Research Visit Grant straight after the conference and, within four months, I had received the grant, organised visas, travel, accommodation, material transfer agreements and experimental procedures!

I arrived in sunny Sydney at the end of March this year, and spent the first 10 days preparing for the experiments and doing some sightseeing before the mice were delivered.

The experiment involved feeding the mice a sugary water solution containing E.coli bacteria that harboured my target plasmid. I then collected samples of their faeces and screened them to see if the bacteria had efficiently colonised the mouse gut. This step took longer than expected, requiring several adjustments to the protocol and a lot of mouse poo collection!

The pCURE plasmids that I was testing are conjugative, meaning that they can transfer from donor bacteria to recipient bacteria. I knew that if I managed to get our pCURE plasmid to transfer into the mouse E. coli, which carries the target plasmid, I would get curing.

So with that in mind, I fed the mice some E. coli carrying the pCURE plasmid and, after a couple hours, checked whether it had transferred to the bacteria in the mouse gut. Fortunately it had and I was able to show that when our pCURE plasmid gets into the target bacteria it will cure the antibiotic resistance plasmid.

Unfortunately this exciting result happened one day before my scheduled departure, but the group in Sydney will be able to build on the good preliminary data. Hopefully they can show that repeated exposure to pCURE plasmids will result in a full “decontamination” of antibiotic resistance plasmids from the mouse gut. In the longer term this result will allow the Birmingham group to apply for further funding for this technology.

The visit was a wonderful experience and I left having cemented an important collaboration. Visiting Australia was a fantastic opportunity not only to do a crucial part of my doctoral work, but also to experience different laboratory and work environments in a country I had never been to before. I am very grateful to the Microbiology Society for supporting me throughout my doctoral studies. –the conference grants and then this Research Visit Grant have truly allowed me to develop and grow as a scientist.