What is a microbiome?

A microbiome is the community of micro-organisms living together in a particular habitat. Humans, animals and plants have their own unique microbiomes, but so do soils, oceans and even buildings. Watch our short animation to learn more.

The microbiomes of things 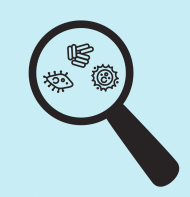 “But how come we are now suddenly so excited by research into microbiomes and what they do? One of the simplest explanations is that we now have the tools to allow us to capture, at different omic levels, e.g. genomes, transciptomes and metabonomes, a whole microbiome and its microbiota and metagenome. We can look into a system across time and across multiple samples, and for the first time determine who’s there and what they are potentially doing, and what we have found is astounding. We are now able to take a holistic rather than reductionist approach to try and explain how different microbiomes are involved in ecosystem and biosystem function.

One of the features of microbiome research is that it is based on a multi-disciplinary research model, unlike traditional microbiology, where a scientist can make a career looking at a single species. In microbiome research, due to the large and complex datasets, the microbiologist needs, for example, biological chemists to create the data for metabolite profiles, and physicists to help make sense of it and answer the research question set in the first place.

For the first time we can start to try and map the interactions between different microbes and the surrounding system, and this approach is throwing up some challenging notions – for example, what is mammalian biology? Previously, we would have considered it to be the interaction between the host’s genome and the environment, but now we need to include the metagenome of the microbiota with which we have co-evolved.”

You can read more about microbiomes in the current issue of Microbiology Today.