On 14-15 June, the Early Careers Microbiologists’ Forum Conference 2018 will be held at the University of Birmingham. The Conference will give Early Career Microbiologists the opportunity to present their research, network and attend professional development sessions. Lee Sherry provides some background of his work developing novel polio vaccines, which he will present during his talk at the ECM Forum Conference 2018. 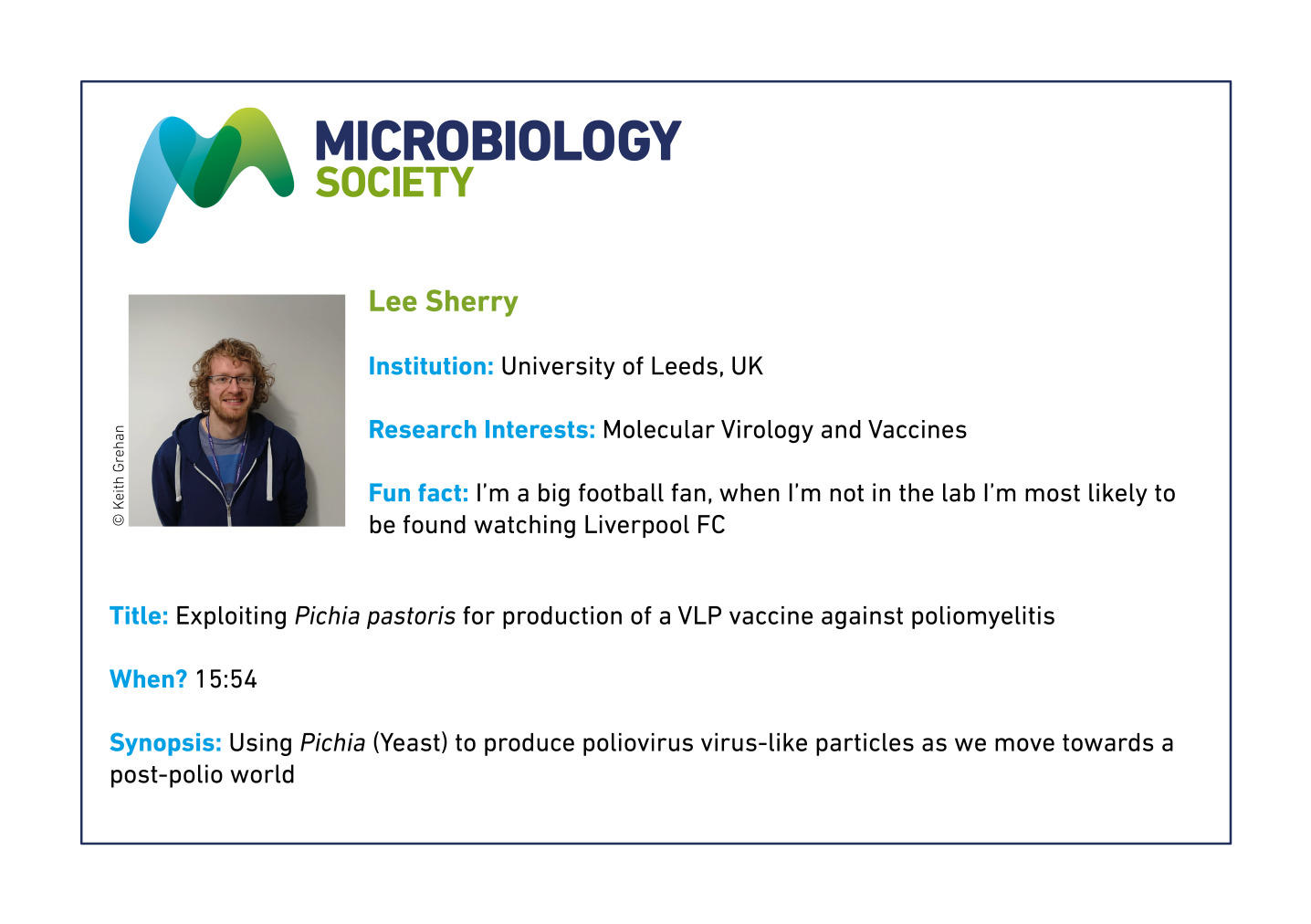 Poliomyelitis, or polio, is a highly infectious viral disease caused by poliovirus (PV). PV mainly affects young children and is transmitted by person-to-person spread or, less frequently, by a contaminated water or food source.

Initial symptoms of polio are common to a number of viral infections; including fever, fatigue, headache, vomiting, stiffness in the neck, and pain in the limbs. However, in a small percentage of cases, the disease causes paralysis, which is often permanent. If this paralysis spreads to the intercostal muscles which help us to breathe, PV can even be fatal. Unfortunately, there is no cure for polio, but it can be prevented by immunisation.

Polio may seem like a distant memory to many people due to the success of the live-attenuated oral (OPV) and inactivated (IPV) vaccines, which have nearly eradicated PV worldwide. PV remains endemic in only Afghanistan, Pakistan and Nigeria. Although we are now closer than ever to eradicating PV, immunisation will need to continue for the foreseeable future to avoid the re-emergence of the disease.

You may be wondering when we already have such effective vaccines why do we need a new vaccine strategy for PV?

Despite their success, both OPV and IPV have biosafety concerns regarding their use in a post-polio world. Therefore, we are currently working as part of a larger WHO-funded consortium alongside the Universities of Oxford, Reading, the National Institute for Biological Standards and Controls, John Innes Centre and the Pirbright Institute to produce the next generation of safer poliovirus vaccines for use in the post-eradication world.

Here, at the University of Leeds, we have established a system to utilise yeast (Pichia pastoris) to produce virus-free virus-like particles (VLPs), which mimic the ‘empty’ capsids (ECs) normally produced in viral infection.

ECs are antigenically indistinguishable from mature virus particles and therefore VLPs offer a potential alternative to the current vaccine strategy. However, these naturally occurring ECs are antigenically unstable, switching conformation at low temperatures which makes them ineffective as a vaccine. To combat this, we have a generated a number of mutants which produce antigenically stable particles.  We use a number of classical purification methods to isolate the VLPs from yeast before further characterisation. Importantly, we are able to show by electron microscopy that the VLPs look identical to ECs produced during a viral infection whilst using antibody recognition to determine if our particles maintain the same conformation as the current vaccine.

One of the key aims of our work is to produce a vaccine that is easily producible in lower-middle income countries, and will not only require the specialist equipment, but also the laboratory-based skills needed for vaccine production in these countries. For many of these countries, there is also a skills gap.

To understand the challenges of vaccine production in lower-middle income countries, in November 2017, Keith Grehan (another post-doctoral fellow in the Stonehouse lab) and I were fortunate enough to travel to Bangladesh with funding from the Microbiology Society.

We spent two weeks at Jahangirnagar University, teaching Master’s level students laboratory techniques related to biotechnology and protein purification, with a special emphasis on the purification of VLPs.

As part of this training, we took over a variety of different equipment that were gifted to the University, so this training can be continued in the future by the current academic staff in Savar. Being involved in this training really helped highlight the importance of producing new vaccines that can easily be translated for production in lower-middle income countries.

This was a phenomenal outreach experience for me as we were able to experience science in a very different environment and hopefully helped offer some skills that these students will need to further their careers in the biological sciences. For anyone with an interest in scientific outreach, I wholeheartedly recommend the international development fund offered by Microbiology Society.

Our Members Professional Development and Grants