Last month the UK Houses of Parliament hosted the Royal Society of Biology’s Annual Voice of the Future event, in which early career scientists and engineers grilled leading politicians and civil servants about science policy. This year, the Microbiology Society sponsored five researchers to attend, including Dr Rachel Edgar from the University of Cambridge. Here, she gives us her thoughts on the event. 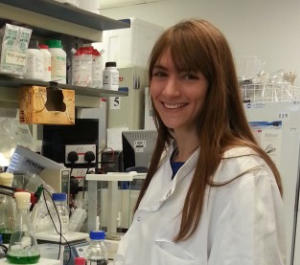 Before attending Voice of the Future (VoF), my perception of ‘science policy’ was quite narrow. I’d envisaged politicians’ discussions focusing on scientific challenges such as food security, microbial resistance and climate change, or perhaps science funding and how political events like the EU referendum might impact research. Subjects covered extensively in the media had shaped my understanding of the interaction between science and government.

While questions on these specific subjects were asked and indeed answered directly during the VoF event, I was surprised by the broad use of scientific findings in decision-making across government.  For example, each government department has a Chief Scientific Advisor and the Government Office for Science aims to ensure all policy is underpinned by robust science.

The VOF event followed the format of a government select committee meeting, giving the participants the opportunity to question various ‘witnesses’, including the Government Chief Scientific Advisor Sir Mark Walport; MPs from the Science and Technology Committee (STC); Minister of State for Universities and Science Jo Johnson MP; and Shadow Minister for Business, Innovation and Skills Yvonne Fovargue MP. Much to our delight, European Space Agency astronaut Tim Peake also addressed us via a video message from the International Space Station. I doubt this is a regular occurrence at select committee meetings and his message inspired attendees and MPs alike!

My fellow Microbiology Society attendees Andy and Rebecca asked questions about the balance of funding between basic and translational research, and government preparedness for emerging infectious diseases such as Zika virus. In general, I was impressed by the MPs’ awareness of scientific issues and how these issues might relate to, and be relayed to, their constituents. Additionally, the seemingly labyrinthine web of government departments with a science remit became clear! Sir Mark highlighted the importance of scientific advice, particularly when it comes to solving problems across time frames longer than the five-year election cycle.

Talking to the enthusiastic and engaged MPs of the cross-party STC was a particular highlight, due to their collaborative and cooperative approach. They addressed many diverse topics, ranging from science reporting in the media to government use of big data, to the obesity crisis. Each member was knowledgeable on different questions and incisive in their answers. The STC can scrutinise any area of science, engineering, technology or research and they clearly want to increase dialogue with the research community.

Encouraging young people from all backgrounds to pursue STEM subjects was an emerging theme throughout the day. Both Jo Johnson and Yvonne Fovargue experienced tough questioning on access to university for poorer students, the UK’s STEM skills gap and lack of diversity in science. Although I appreciated their consideration of these issues, I felt they still had some way to go in addressing them fully. This led to lively debate when the Microbiology Society attendees and policy staff went to dinner after the event!

Voice of the Future allowed us to have a taste of life in the ‘Westminster bubble’, but the MPs were very outward-looking – at least with regards to science policy. They universally welcomed the participation of scientists and young people in the political process and encouraged all of us to get involved. I will certainly be more forthcoming in bringing science-related concerns and questions to my local MP, and look for future opportunities to communicate with government policy-makers.

Rachel is a Research Associate at the Wellcome Trust-MRC Institute of Metabolic Science, University of Cambridge. Rachel has appeared on our blog before, talking about her research into the role that circadian rhythms play in viral infection.