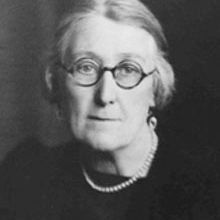 The Microbiology Society has nominated Marjory Stephenson to be on the new £50 note, in the Bank of England’s nomination process which is closing today.

The Bank of England would like to feature someone who has contributed to science when they issue the new note.

In 1953 the Society established the Marjory Stephenson Prize Lecture in her memory. The prize is awarded annually to an individual who has made exceptional contributions to the discipline of microbiology.

The Bank of England will announce their chosen person for the £50 note in 2019.