Today at the Society’s Focused Meeting on Industrial Applications of Metal–Microbe Interactions, Dr Joanne Santini spoke about her group’s research into biosensors for arsenic contamination. 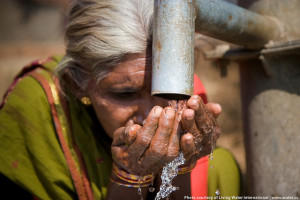 In the 1970s, the United Nations (UN) and the World Bank led a movement to improve the quality of drinking water in Bangladesh. At the time, pathogens in dirty surface water were infecting and killing huge numbers of the country’s population, many of them children. The solution was simple – by digging down into underground sources of water and drawing it up through a tube, communities could be given access to clean, safe water. Tube wells were a cheap and effective way to prevent diseases like cholera and dysentery, and would save thousands of lives. Or so people thought.

The problem was that groundwater in Bangladesh, like a number of other countries, contains naturally high levels of arsenic. The water wasn’t tested when the tube wells were rolled out, and contaminated water has been slowly poisoning the nation ever since. According to some estimates, up to 97% of people in rural communities drink water from tube wells, and up to half of the entire population of Bangladesh is at risk of arsenic exposure in this way.

Soluble forms of arsenic are extremely toxic to humans. Symptoms of arsenic poisoning (arsenicosis) can take years to develop, and usually begin with lesions on the hands and feet – a source of great social stigma in Bangladesh. Long-term exposure to arsenic can lead to diabetes, heart disease and many forms of cancer. Pregnant mothers exposed to arsenic are at risk of spontaneous abortion and stillbirth. With the best of intentions, the tube well programme had removed one source of unsafe water only to replace it with another that was just as deadly.

Unlike humans, some species of bacteria aren’t affected by exposure to arsenic. In fact, they are able to use it, in combination with oxygen and carbon dioxide, as their sole food source. Bacteria that can grow using inorganic substances in this way are called chemolithotrophs. They don’t require light, and they can produce organic compounds, like sugars and amino acids, from the chemical energy found in things like sulphur, iron or arsenic.

In the late 1990s, Dr Joanne Santini discovered one of these bacteria living inside a gold mine. The bacterium is able to metabolise arsenic, something which Joanne has been studying ever since. Her aim is to harness the natural ability of the bacterium in order to detect and even purify water that has been contaminated with arsenic, in countries like Bangladesh, India and Nepal.

“The bug is called NT-26, because it was isolated from the Northern Territory in Australia,” says Joanne. “We’ve been studying its biochemistry over the years, trying to understand how it metabolises arsenic. And eventually, we isolated the enzyme that it uses to do that.”

The enzyme is complex, containing metals like iron and molybdenum that it uses to remove electrons from one form of arsenic (called arsenite, toxic to us) and so convert it to another (called arsenate, also toxic but less so than arsenite). The energy released from this process is usually captured by the bacteria for growth, but Joanne and her team have put it to another use.

“For every arsenite that is converted to arsenate by this enzyme, two electrons are released,” Joanne explains. “You can measure these electrons by measuring voltage, and so you can very accurately determine how much arsenite is in drinking water.”

The lab was able to take the gene for making this enzyme and insert it into a safe strain of E. coli. The E. coli bacteria then synthesises large quantities of the enzyme that the team can remove and purify. Unlike NT-26, E. coli doesn’t have to be cultured in arsenic, and it is cheap and easy to manipulate in the lab.

The enzyme can then be used as a biosensor to check the arsenic levels in drinking water. The idea is to create a device a bit like a blood sugar monitor. Water is dropped onto small disposable strips that have been coated in the enzyme. These are inserted into the device, which converts any electrical current produced by the enzyme into a read-out for arsenic concentration. 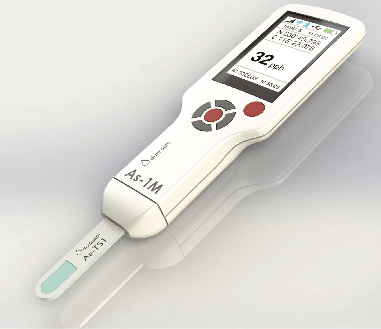 “The device has to be cheap and very simple to use,” Joanne says. “One machine could be used by a whole village, and we’re hoping to produce them for the same price as a blood glucose sensor, so around US$30–50. The strips would cost less than a dollar each.”

Current methods of arsenic detection often involve chemical tests, which are more expensive, more complicated, and often produce toxic substances themselves. But a device like the one Joanne describes could be used to collect data on contaminated drinking water sites around the world, and monitor clean sites for future contamination. The team at UCL, in collaboration with Imperial College London and Bio Nano Consulting, is currently working on increasing the sensitivity of the technology, and they are aiming to run a European field trial of the device in the coming months. Down the line, it will be taken to countries in South Asia, where it could be the first step in providing truly clean drinking water for the millions of people suffering from arsenic poisoning.