The JAM was packed…

Last month, the Institute for Microbiology and Infection hosted the first Junior Award for Microbiology event, organised to give early-career researchers a forum to talk about their research and network with their peers. In this post, Dr Amanda Rossiter – a Sir Henry Wellcome Postdoctoral Fellow at the University of Birmingham – tells us about the event. 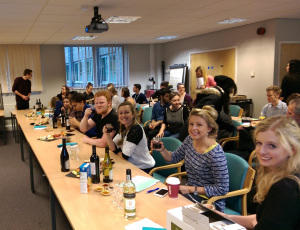 Nearly every academic institution runs a seminar programme, which invites academics from across the world to present their latest research. While this is a very successful model, these programmes are predominantly aimed at senior academics. At the Institute for Microbiology and Infection (IMI), within the University of Birmingham, many junior academics recognised the lack of networking events that were aimed solely at junior academics. To help resolve this issue, I have been working with a group of microbe-lovers at the IMI on a shared vision to revolutionise the way early-career researchers interact. The vision was simple: create an event that motivates early-career researchers to network with their peers. Emphasis was placed on creating a relaxed environment, which would encourage junior microbiologists to let their ‘scientific mojos’ flow, without the intimidating presence of Professors who often, let’s face it, dominate Q&A sessions.

A brainstorming session at the university bar helped us formulate what was to become the Junior Award for Microbiology (JAM). The plan was to invite promising, early-career scientists from across the UK and Ireland to present their research at the IMI, in front of a like-minded audience (up to five years post-PhD). This relatively simplistic idea was met with overwhelming support. In fact, the main feedback we got from academics was, “I’m surprised this hasn’t been done already”.

We were delighted to receive support from the Microbiology Society and the IMI to cover the costs of running a monthly seminar programme during the 2015-2016 term and quickly got to work on launching the JAM talks online, with its very own website www.jamtalks.comand twitter account @JAM_talks. We invited applications for speakers and at midnight on 30 September 2015, we had received more than 40! This far exceeded our expectations and once we had dealt with the near-impossible task of selecting eight talks from a pool of fantastic abstracts – one for each of the events – we invited Bevin McGeever from Imperial College to present the first ever JAM talk.

On 16 October 2015, keen microbiologists flocked to the event and it was rewarding to see how impressed they were with the layout of the room; every table was decorated with bottles of wine, to be enjoyed in small jam jars. These, along with the selection of cheeses, definitely created a buzz and made the small talk (no pun intended) much easier.

After a brief introduction to the JAM talks, we handed over to Bevin who gave a fantastic talk on her discovery of ubiquitin ligases, used by pathogenic E. coli to modulate cell cycle regulatory proteins in human cells. Bevin’s talk prompted a fantastic discussion among the audience, with many junior microbiologists offering up intriguing questions. A panel of judges scored Bevin’s talk – we’ll also be doing this for each of the other speakers, with the eventual winner receiving the JAM Champion trophy! To thank Bevin for her talk, and because the committee love all things JAM, we awarded Bevin with a JAM jar trophy, upon which we’d had her name, the date and JAM logo etched.

All in all, the first JAM talk was a huge success. We hope these seminars will continue to provide opportunities for early-career researchers to network and forge those all-important collaborations. Ultimately, we are aiming for these JAM talks to serve as a model to inspire not only microbiologists, but scientists from all fields, to initiate their own seminar series targeted at junior academics. So, keep in touch with #Jamtalks and watch this space for the winner, to be announced in 2016.