Baleen whales are some of the largest creatures on Earth, but they feed on some of the smallest – tiny ocean-dwelling crustaceans called krill and copepods. 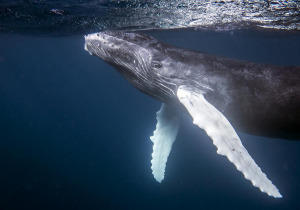 Smaller still are the microscopic organisms that help the whales to digest this vast quantity of prey.

The diversity and function of the gut microbes living inside baleen whales has never been studied before. But new research has begun to shed light on these bacterial communities, and their role in shaping the natural history of their leviathan hosts.

We spoke to Annabel Beichman (UCLA) and Jon Sanders (Harvard University) about the surprising discovery they made when they looked inside the whale.

Don’t forget, you can subscribe to Microbe Talk on iTunes. You can also find us on Soundcloud and Stitcher.

Image credit: Christopher Michel on Flickr under CC BY 2.0