Science and the Assembly 2016

Last month, the Microbiology Society’s Public Affairs team attended the annual Science and the Assembly event at the National Assembly for Wales. Organised by the Royal Society of Chemistry, the event aims strengthen links between Welsh policy-makers and the STEMM community. In this post, the Microbiology Society’s Hannah Forrest gives us an insight into the event, of which the theme was ‘Planetary and Space Science’. 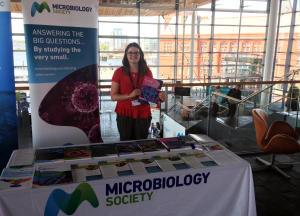 Professor Julie Williams, the Chief Scientific Adviser for Wales, opened this year’s Science and the Assembly. In her keynote address, she highlighted the Welsh Government’s Sêr Cymru (“Stars Wales”) programme, which aims to strengthen the Welsh scientific community by attracting leading academics into research posts at Welsh universities.

Professor Williams stated that the Welsh Government is focusing on increasing the number of women working in STEMM and applied social science subjects, as well as helping early career researchers and those who have taken career breaks.

We heard a range of diverse and interesting talks about planetary and space science being carried out at institutions across Wales and the United Kingdom. Professor Manuel Grande, from Aberystwyth University, talked about his team’s involvement in European Space Agency missions, while Dr Patrick Sutton from Cardiff University, discussed his involvement in the recent discovery of gravitational waves. The Head of Education at the UK Space Agency spoke about all of the outreach work they are doing to promote space and planetary science, including projects involving everyone’s favourite astronaut, Tim Peake.

Astrobiologist Dr Lewis Dartnell, a UK Space Agency Research Fellow at the University of Kent, gave an interesting microbiology-relevant talk about the interdisciplinary approaches being used to search for signs of life beyond Earth. Dr Dartnell discussed research investigating extremophile micro-organisms, the robotic exploration of the solar system, and the search for extra solar planets or ‘super-Earths’ – planets that are similar to the make-up of Earth.

An exhibition in the Senedd, the main public building of the National Assembly, provided the opportunity for Assembly Members to network with researchers, learned societies and other organisations in attendance. Mark Isherwood, the Welsh Conservative Assembly Member for North Wales, visited the Microbiology Society exhibit and highlighted to me that a question on the Welsh Government’s response to the recently published O’Neill report on antimicrobial resistance had been tabled for First Minister’s questions in the Senedd debating chamber that afternoon. It was encouraging to hear that an important issue relevant to microbiology and public health was being discussed by the Assembly and to have the opportunity to directly engage with them.

If you would like to know more about the Society’s science policy activities and opportunities to get involved, visit the Policy section on our website, keep an eye on our newsletter, or contact [email protected]. Also check out the Society’s response to the O’Neill report on antimicrobial resistance.