When it rains it pours – the spread of resistance

“I don’t have my umbrella!”. It’s 5 PM in Tooting, I’m stood at the exit of the hospital and the heavens have opened before me. “You can share mine,” says a kind stranger, clearly noticing my despondent slump. They’re heading for the station too. Sharing is a very human trait, one that has just saved me from getting drenched at the end of a long day. Surprisingly, it’s also a very bacterial trait. 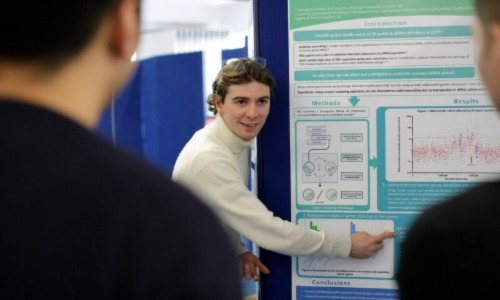 Much like me with my umbrella, bacteria don’t always carry around DNA that might be useful. So, what does a bacterium do when it finds itself in the presence of an antibiotic with its proverbial pants pulled down? It borrows from a stranger.

The process is called horizontal gene transfer, and it allows bacteria to share DNA between each other. Through cellular bridges and pores in the cell, DNA is constantly being exchanged. Thanks to this, the microbial tree of life looks less like a tree and more like a web made by caffeinated spiders. It is also a major factor as to why an estimated 1.2 million people were killed globally by antibiotic-resistant infections in 2019.

Resistance to an antibiotic is usually caused by a resistance gene, a section of DNA that makes a protein to protect the bacterium against the harmful effects of the antibiotic. With our high usage of antibiotics, resistance genes are being selected for pretty much everywhere – from our microbiome to our wastewater. Moreover, if a bacterium is exposed to an antibiotic and doesn’t have the right gene, it may just borrow one. As a result, resistant infections are on the rise.

The concerning bacteria that I work with are Methicillin-resistant Staphylococcus aureus (MRSA). Of the 1.2 million deaths I mentioned before, MRSA has caused approximately 100,000 – more than the population of the Isle of Man. The species, S. aureus, has evolved to live on humans as part of our microbiome. As my supervisor, Jodi once said, “It lives up your nose and is meant to be there”. It usually only causes infection if it gets into a wound.

As I type this, I’m wincing from an infected cut on my finger. The culprit? Probably MRSA. However, I’m not worried because my immune system will sort it out – so I continue to type merrily away. But, if MRSA causes an infection in someone who is immunocompromised, it can spell trouble. Here, antibiotics may be lifesaving.

The bad news is MRSA are extremely good at sharing genes, and therefore many strains have gained resistance to multiple antibiotics. The good news is that we still have a particularly effective antibiotic, called vancomycin. But what happens when MRSA finds a stranger with a vancomycin- resistance umbrella?

Well, luckily, there are rules.

Bacteria have rules as to what they share, and who they share it with. Say for example that I refused the stranger’s umbrella because it was the colour blue, or because my mum always warned me of “stranger danger”. New DNA isn’t always helpful, it could be an incoming virus. So, bacteria need a way to control what genetic material they accept. Although, instead of a mother’s wisdom, bacteria determine their sharing rules through genes, and the proteins they produce. 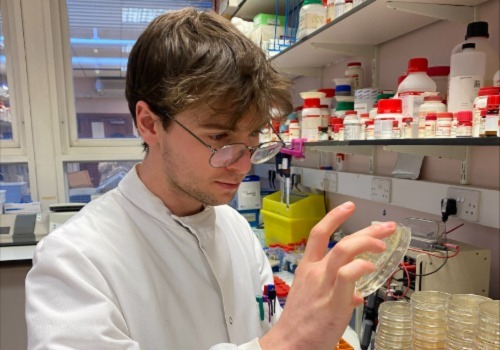 My research seeks to understand what the rules are, and which genes are setting them.

To do this, I’m scanning an MRSA genome for genes that affect the transfer of DNA. To do that, I look at whether deleting a gene affects the rate at which DNA is exchanged. If the rate increases, perhaps this gene regulates the process, or in other words, sets the rules.

This research requires many, many MRSA mutants. The mutants are genetically identical, except for one key change: each has a different gene deleted. First, I add each one of these mutants to tubes that contain all the resources that they need to grow. Then I add the key ingredient - bacteriophage (or “phage”).

These are viruses that infect bacteria, like how cold viruses infect humans. When phage find a host bacterium, they insert their DNA and force the host to make hundreds of viral copies. But sometimes things go wrong, and instead of a copy carrying the phage genome, it ends up carrying a bit of bacterial host DNA. When this viral particle is then released and finds a new host, this handy bit of genetic material is acquired by the new host. This is how MRSA exchange DNA.

I add phage to the mixture and incubate it under conditions imitating those of the human body – MRSA’s favourite. Bacteria grow, phage replicate and DNA is traded. I then measure the rate of DNA exchange. If deleting a gene increases the rate, then that gene might control DNA transfer. The next step is to figure out how. Does it destroy unfamiliar DNA? Does it block phage from attaching?

With around 2,000 genes to explore, the process is a slow one. But, along the way I might discover some super useful genes that could be harnessed as new biotechnologies, like the Nobel prize winning gene editing technology CRISPR. It was initially discovered as a form of bacterial immunity, targeting and destroying foreign DNA. Exactly like the sort of rule-setter we’re looking for.

Remember when I mentioned how we’re worried that vancomycin resistance will emerge in MRSA? Well, I may have misled you. The truth is it has already happened – in 2002. And again. And again, more than 50 times since then. Yet, we can still use vancomycin. Why hasn’t vancomycin resistance spread like wildfire? We don’t know. We need to figure out the rules first, and we need to do it now. At any time, MRSA could find the right stranger with the right umbrella.