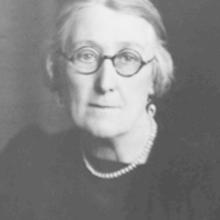 Established in 1953, the award is named after Marjory Stephenson, member of the inagural committee of the Society for General Microbiology (now the Microbiology Society) and its second President, (1947-1948). Since the award was instituted, 20 microbiologists have been awarded the Marjory Stephenson Prize and many of them have gone on to achieve distinguished careers and honours.

The recipient of the Prize Lecture will receive £1,000 and be expected to give a lecture based on the work for which the award has been made at the Society's Annual Conference. The recipient will be strongly encouraged to publish the lecture in one of the Society’s journals, whichever is the most suitable.This decision will be at the discretion of the Editors of the journals.

Nominations for the 2023 Marjory Stephenson Prize are now closed.

The following playlist includes some of the lectures from our previous Marjory Stephenson Prize winners.

We welcome nominations of individuals who have made exceptional contributions to the discipline of microbiology.

The Marjory Stephenson Prize recognises those who have made a sustained outstanding contribution to microbiology.