Ash dieback disease: A plague on our ashes

Ash dieback is expected to kill millions of Britain’s ash trees over the next ten years. Caused by a fungus, Hymenoscyphus fraxineus, the disease kills trees by spreading through the branches and strangling the vascular system. 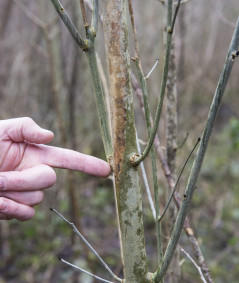 Dr Anne Edwards and Prof Allan Downie study ash dieback at the John Innes Centre in Norwich. We revisit the woodland where Anne first found ash dieback in 2012 to see how some trees seem to be tolerant to the fungus, and learn what’s being done in the fight against the disease.

The following is an extract from an article in Microbiology Today. You can read the full article here.

We were aware of the disease because of our involvement in helping manage Ashwellthorpe Lower Wood, an ancient coppiced woodland in South Norfolk. This woodland, owned by the Norfolk Wildlife Trust, is a Site of Special Scientific Interest (SSSI) and its name, Ashwellthorpe, comes from the Vikings, for whom the ash (Fraxinus excelsior)was sacred. It was devastating to see young coppiced regrowth showing early signs of what looked like ash dieback. Since this occurred just a few miles from where we work at the John Innes Centre (which specialises in plant and microbial research), we asked ourselves and our colleagues what we could do to help an iconic native tree.

With funding from the BBSRC and Defra, a research consortium called Nornex (http://nornex.org/) was set up including groups from the John Innes Centre, The Sainsbury Laboratory and The Genome Analysis Centre (all in Norwich), the Universities of Exeter, Edinburgh and York, FERA, Forest Research, the University of Copenhagen, and the Norwegian Forest and Landscape Institute. The aims were to (a) use genomics-based tools to establish a foundation of knowledge on the pathogen, (b) establish laboratory-based tests of pathogenicity and assays of growth and survival of the pathogen, and (c) use genomics and transcriptome-based approaches in ash trees to try to map tolerance (resistance) to the disease.

These aims were underpinned by a desire to try to take a different approach and use an open access and crowdsourcing approach. As part of that, a website called openashdieback (http://oadb.tsl.ac.uk/) was established to host new observations and provide access to data generated by the consortium. In view of the intense public interest, we also developed and released Fraxinus, a Facebook-based citizen science genomics-based game (https://apps.facebook.com/fraxinusgame/). This enabled non-specialists to contribute to the genomic studies of the pathogen by helping to improve genetic variant predictions from DNA sequence alignments. Many computer programs have been devised to optimise alignments. However, none can improve on the pattern recognition skills of the human eye. Once an alignment process is complete, genetic variations such as single nucleotide polymorphisms (SNPs) or insertion-deletion polymorphisms (INDELs) can be identified and further studied in relation to alterations in, for example, pathogenicity.