The Prize Medal is awarded annually to an outstanding microbiologist who is a global leader in their field and whose work has had a far-reaching impact beyond the field of microbiology. In 2020, the Prize medal was awarded to Professor Martin Blaser from Rutgers University, USA, for his work on antibiotic’s effects on the human microbiome. At Annual Conference Online 2021, Professor Blaser presented his prize lecture titled ‘Antibiotics at the crossroads.’ 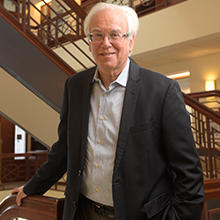 Professor Blaser began his talk by highlighting the increase in the prevalence of diseases such as obesity over the past few decades. Professor Blaser asks, are there individual causes behind each of the diseases, or is there one underlining cause that links them all?

When thinking about the theory behind this increase, Professor Blaser decided to focus on the effect of the microbiome. It has been well known for a long time that mothers pass on microbes to their child, with the first big exchange of microbes taking place when a mother’s waters break.

Things are changing now, as pregnant women live in a world with antibiotics and antiseptic drugs. Plus, things have changed for babies too. Many are born by caesarean (one in three in the USA), missing the birth canal where many microbes are found, and parenting practices now include extensive bathing and bottle feeding with formula milk.

This led Professor Blaser to develop the idea of the theory of disappearing microbiota, meaning changed human ecology has altered transmission and maintenance of ancestral microbes, affecting microbiota composition. Both beneficial and pathogenic microbes acquired early in life are especially important since they affect a developmentally critical stage.

Professor Blaser began to explore this hypothesis ten years ago by looking at the effect of maternal status on the resident microbiota of the next generation. He had the idea that ‘ancient’ mothers had a conserved microbiota that would be passed down to following generations. However, if microbes were lost and could not be gained back then the next generation would be born at a deficit.

Since then more and more evidence has been found to support this idea as correct. A study looking at the prevalence of Helicobacter pylori in Japanese families found a significant decrease over just three generations.

So, what is the cause? Antibiotics? This is the next question Professor Blaser went on to answer. Antibiotics have revolutionised medicine and saved numerous lives all around the world. However, antibiotic use has increased significantly globally. Studies in Bangladesh and Pakistan found that in their first year of life, children were receiving up to ten courses of antibiotics.

Professor Blaser stressed that antibiotic resistance is only the tip of the iceberg when looking at the consequence of our increased use of antibiotics. Often overlooked, microbial disruption is another dangerous consequence that can have many varied clinical implications. Evidence from a study he was involved in showed that being exposed to antibiotics at an early age increased the probability of developing obesity and seven other childhood conditions.

Currently, antibiotics are used in farming to increase the growth rate of animals. Mouse studies have shown that antibiotics affect metabolism and cause an increase in body fat. Further studies supported this by showing that an antibiotic course that is just a few weeks long is enough to have a life-long effect on metabolism.

However, when looking at the faecal microbiota community in the mice, this reverted to look similar to the microbiome of control mice. An antibiotic’s effect on microbiome composition is transient, despite it having a long-term impact on the phenotype.

A Danish study found that the more antibiotics children received in their first year of life, the more likely they were to develop inflammatory bowel disease (IBD). Following this, a study from Professor Blaser’s lab, which conventionalised pregnant germ-free mice with an antibiotic-perturbed microbiome to examine effects on the offspring’s bowels. Though neither pups nor mothers received antibiotics when compared to control, the pups had increased inflammation, showing enhanced disease signal is entirely microbial and that antibiotic effect crosses generations.

In the final section of his talk, Professor Blaser discussed what hope there is for the future. He began by mentioning the more obvious solution, reducing the use of unnecessary antibiotics. However, this may prove challenging as antibiotics have become a pillar of modern medicine.

Another solution is the restoration of the microbiome. In a study looking at the development of diabetes in non-obese diabetic (NOD) mice, researchers found that you can reverse the effects of antibiotics by carrying out a microbiota transfer from the mother’s large intestine. Using this information, Professor Blaser predicts that future medicine may involve paediatricians examining babies’ nappies to assess their microbiota and any missing microbes may be administered in early life for restoration.

To end his speech, Professor Blaser highlighted The Microbiota Vault, a global non-profit effort to conserve long-term health for humanity. The initiative aims to preserve microbial diversity as a method to support health globally.

You can view Professor Blaser’s full Prize Lecture below.