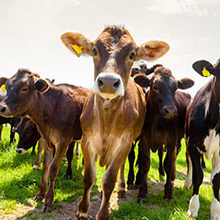 Researchers have seen the potential for sustainable bioplastic production using wastewater from the dairy industry.

Bioplastics could hold the answer to the growing plastic problem. However, many so-called bioplastics are only partly bio-based and nonbiodegradable meaning they do not break down in the environment and still contribute to plastic pollution.

Polyhydroxyalkanoate (PHA) is a fully bio-based and biodegradable bioplastic. It has the additional advantage over other bioplastics in that it can be made from industry waste products, creating a more sustainable economy.

Over the last four years, there has been a steep increase in milk production from the Irish dairy industry. Researchers from the NEWTRIENTS project at University College Cork are studying how to use wastewater from dairy farms to sustainably produce PHA bioplastic.

In the milk industry, for every litre of milk processed, up to ten litres of wastewater are produced. The wastewater has high levels of organic pollutants, which deplete oxygen levels in waterbodies, promoting algal growth, harming fish and other aquatic life. These pollutants are removed before disposal, but the processing system could be adapted to produce PHAs.

To achieve this, the building blocks for PHAs, known as volatile fatty acids, need to be created. In certain conditions, bacteria are capable of metabolising the organic pollutants in wastewater to produce these acids.

In a given colony of bacteria, there will be a mix of species that can produce PHAs, such as Cupriavidus necator and Bacillus subtilis, and species that can’t produce PHAs. The next step is creating a colony optimised for forming PHAs. To do this the colony is put under conditions that favour the PHA-forming bacteria, so they reproduce to create a colony with a majority of PHA forming bacteria, optimised for PHA production.

In the final stage, the fatty acids are combined with the PHA-forming bacteria in a reactor. This is then used to create the end-product PHA.

It is estimated that nearly 360 million tonnes of plastic are unsustainably produced each year. Arno Fricke, a researcher with the NEWTRIENTS project, said; “Creating value from waste materials and resource recovery will be important drivers of the biotechnological advances needed to reshape economic models and enable growth and development to become independent from non-renewable resources.”

In recent years there has been a global shift away from a traditional linear economy – where items are made, used and disposed of – towards a circular economy, where products are recovered and regenerated wherever possible.

Arno Fricke said, “Our current economic model is fundamentally a linear one, based on resource conversion to products which then become waste, or generate waste during production. A circular economy model is more favourable, enabling maximised resource efficiency and minimised waste outputs through process redesign, waste valorisation and recycling approaches.”

This new technique could be used as a viable approach to PHA production, and also contribute to the production of a more circular economy. This research is currently at the laboratory stage, and in the future, the project will be scaled-up to test its viability.

Arno Fricke will present his findings at the Microbiology Society Annual Conference 2019. His poster, ‘Dairy processing wastewater as a feedstock for microbial bioplastic production’, will be available to view from Wednesday 10 April to Thursday 11 April in Hall 1D.