An interview with Professor Joanne Santini

Joanne Santini is a member of the Society and Professor of Microbiology at University College London (UCL). At UCL, she runs the Santini Lab, which focuses on research into metalloid metabolising microbes. In this interview, Joanne tells us how she helped kickstart [email protected] – a network aiming to connect everyone with an interest in microbiology at UCL. Joanne also shares some advice for anyone thinking about joining the Society and how it helped her career, which led her to develop an arsenic biosensor based on her discovery of bacterium NT-26. 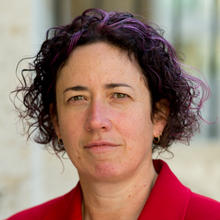 Can you tell us about your area of research and your current role?

For the past 20 years I’ve been working primarily on the microbial metabolism of metalloids such as arsenic. My research was focused on the mechanism of the metabolism and its prevalence in the environment, with a view to using those organisms for remediation of arsenic and development of biosensors. More recently, I started doing work on bacteriophages in the human gut.

You recently featured on the BBC People Fixing the World podcast, where you spoke about the NT-26 bacterium you discovered in Australia. Can you tell us a bit about it and why this arsenic-eating bacterium caught your eye?

It all came about when I was completing my PhD on a different topic. We were looking to isolate organisms which can be used for remediation of arsenic. I knew that energy is produced during metabolism of arsenic. We found out there are, in fact, organisms that can metabolise it. So, we went to search for them. We were looking for the right environment for such organisms to thrive, which was one with little to no organic matter. We decided to look in a gold mine, where there is very little organic matter. We travelled to The Granites goldmine in the Northern Territory of Australia and sampled about 300 metres below the surface. This meant there was little or no organic matter other than the microbes. In the gold mines, you often find gold associated with pyrite (fool’s gold) and arsenopyrite. We were interested in collecting the arsenopyrite-containing minerals and did so by putting them into a growth medium. These samples came back to the lab and I eventually isolated and selected the organisms that could metabolise arsenic. I found that bacterium number 26, NT (Northern Territory)-26, didn’t need anything other than CO2 as its carbon source, and that’s exactly what we were looking for. The other reason why we chose NT-26 was that it was the fastest arsenic metaboliser.

You’ve spoken about using NT-26 to purify water in areas with high arsenic pollution. How did that go?

Unfortunately, our original idea to use the bacterium for water purification didn’t work out. This was probably due to a number of things, including people’s fear of microbes and not being aware of the difference between the ‘good’ and the ‘bad’ microbes. We did, however, find a use for it and that was to use the arsenic-metabolising enzyme as an arsenic biosensor.

You mentioned public fear when it comes to microbiology; what do you think it would take for people to be more aware about the benefits of microbes?

In the media you usually only get stories about nasty microbes and pathogens killing people. We need more good stories – microbes cleaning up oil spills, those involved in human, animal and plant health etc. The public needs to know that the pathogenic organisms make up a tiny proportion of the whole microbial world. The rest either have no deleterious effect on us or are important for our survival.

You launched [email protected] along with Vice-Provost (Enterprise) Dr Celia Caulcott. Can you tell us more about this project and its aims?

At UCL there are people working on different aspects of microbiology in many departments and faculties. The initial purpose of what we were trying to do was to find and build the microbiology community with the view to building the research, innovation and teaching. Part of that is also engaging the public, outreach activities and having an impact on policy-makers.

What encouraged you to pursue a career in microbiology?

I think seeing microbes under the microscope for the first time – that had a huge impact. I find all aspects of microbiology fascinating. They are so diverse and important to all facets of life. We would not exist without microbes.

What do you consider to be your biggest professional achievement(s) so far?

If the arsenic biosensor can save lives, then it would have to be that.

You were a member of the Prokaryotic Division Committee at the Microbiology Society; can you tell us about your role?

It gave me a voice. I don’t think many members of the Society realise that they have a voice. It wasn’t until I became a member of the Division that I realised this. Contributing to the annual symposium by putting forward ideas for symposia was great. I met lots of interesting people and learned how the Society works. I came from Australia, so I was a bit lost in the UK system as a microbiologist and especially as an environmental microbiologist. I didn’t really know the community but being involved with the Society and the Division gave me an opportunity to be part of something bigger.

Just do it. It’s something I should’ve done at the very start, so I’d recommend joining to anyone at any career stage. The best way to have influence or just to show your passion is by being involved with the Society. If you’re passionate about microbes then it’s a no-brainer.