An interview with Professor Brendan Wren

Brendan Wren is Professor of Microbial Pathogenesis at the London School of Hygiene and Tropical Medicine. His research group focuses on bacterial glycosylation and the use of glycoengineering for vaccine production. 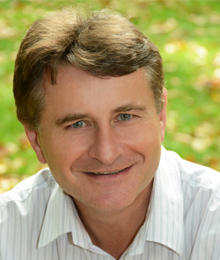 Tell us more about your research.

Our vaccine journey began in 1996 with the identification of an unusual 'eukaryotic-like,' N-linked glycosylation system, during the early stages of the Campylobacter jejuni genome project. Curiosity-driven research led us to express the system in Escherichia coli – the first example of cloning a glycoprotein in the workhorse organism of biotechnology.

Why does this research matter to microbiology?

The demonstration that glycans such as O-antigens and capsules could also be highjacked and transferred to carrier proteins in E. coli, has led to a new era in the production of glycoconjugate vaccines.

Glycoconjugate vaccines are one of the success stories of modern medicine and have led to a significant reduction in the global occurrence of bacterial meningitis and pneumonia. Coupling a glycan to a protein results in multiple triggers for the immune system and creates long term immunological memory.

What are the advantages to this type of vaccine being developed?

A major advantage of glycoconjugate vaccines is that they are suitable for infants, and with over two billion doses given worldwide, they have an excellent safety record. However, glycoconjugate vaccines produced using traditional chemical procedures are expensive and only a few have been licenced. This is set to change through the glycoengineering of recombinant vaccines in E. coli that act as mini factories for the production of an inexhaustible and renewable supply of vaccine product.

Can you tell us more about this new production process?

How has this influenced vaccine production?

Numerous vaccine candidates have now been produced using PGCT, which include those improving existing licenced vaccines (e.g. pneumococcal), entirely new vaccines for both Gram-positive and Gram-negative bacteria, and veterinary pathogens. Importantly, the simple production process means that recombinant glycoconjugate vaccines can be manufactured cheaply in low-income countries, where they are most needed. Given the continued threat of antimicrobial resistance, the production of new glycoconjugate vaccines against old and new bacterial foes is particularly timely.

Why does the production of vaccines matter to microbiology?

From curiosity, we now realise that nearly all bacteria have glycosylation pathways. The study of these systems continues to provide new insights into the basic biology of microbes, concurrent with new biotechnological applications.