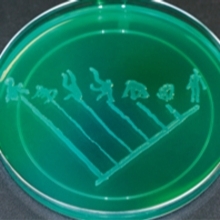 Concepts around when life evolved, and how life is formed, can be complex for students to understand. These examples of practical activities can be done with students to demonstrate how long microbes have been in existence, and also show how cells assemble, giving both large-scale and small-scale demonstrations of where life comes from.

How do cells assemble?

Have you ever wondered how cells form? Do they just appear immediately at random as the beautifully coloured structures we see in textbooks? Of course not! Cells self-assemble due to polar forces and interactions with phospholipids. In this experiment, you can demonstrate how the cell wall can assemble in a clear and visible way.

1.   Add 100 ml of water to the jar.
2.   Add 25 ml of oil.
3.   Place the lid on the jar and give it a good shake for 3–5 seconds. The liquids should appear mixed at first and then start separating.
4.   While the mixture is separating, crack the egg into the smaller bowl. The egg yolk contains fats, oily compounds and phospholipid compounds.
5.   By now, the oil and water should have completely separated and the oil has formed a layer on top of the water. Take the eye dropper, squeeze it and stab it into the centre of the yolk. Get a sample of yolk and add a drop to the jar with the water and oil. The drop of yolk should fall through the oil but float on top of the water layer.
6.   Place the lid back on the jar and shake again for 3–5 seconds, like before.
7.   Watch what happens to the oil layer this time – there will be some movement!

Water molecules are attracted to one another (hydrophilic) due to the polar forces between them. Oil molecules, on the other hand, are non-polar (hydrophobic) and are repelled from the water. This is why you see two distinct layers when oil and water are placed together. Due to oil being less dense, it forms the top layer.

Molecules within the yolk are classed as phospholipids, which have a hydrophilic ‘head’ and a hydrophobic ‘tail’, as shown by the diagram. This means they can attract both polar and non-polar molecules. Phospholipids make up the majority of the cell wall, by forming a bilayer around polar molecules such as water, DNA or RNA.

Two things are happening when the yolk is added to the oil layer. Firstly, phospholipid and oil molecules will combine and float to the top of the oil layer and form a micelle. Secondly, a bilayer will be formed, similar to that pictured and encapsulate a water molecule, this will move to the lower half of the oil layer.

As the centre of the bilayer has a non-polar core, it makes it very difficult for polar molecules to freely pass through it (due to repulsive forces) and therefore the contents within these vesicles will not leak out. This is how a cell keeps all of its important contents inside! 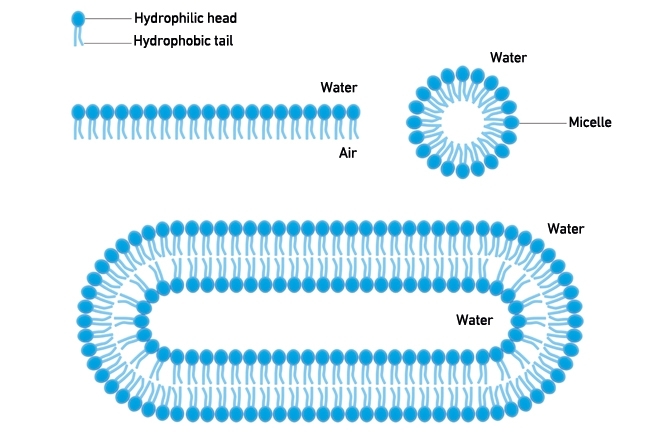 How old are microbes?

The Earth is around 5 billion years old and a lot has happened since its formation. Microbes have been around for a large portion of this time. For most people it is too hard to quantify this timescale – so let’s visualise it using significant events that led up to life as we know it today.

1.   Start by laying out the card so there is one long continuous length of 5 metres. This represents 5 billion years and the geological timescale you are working with. (Note – every 1 metre represents 1 billion years and every 10 centimetres represents 100 million years.) It might be an idea to make a mark at every metre to show when 1 billion years has occurred.
2.   At one end of the line, mark this with ‘present day’ and at the other end mark with ‘5 billion years ago’.
3.   Write each of the statements in the table below on one of the 20 cards and place them at the corresponding length along the line from the ‘present day mark’. You may need to draw arrows when it gets closer to present day as a lot of events happen in a short space of time!
4.   Once all twenty cards are stuck down along the timeline you can appreciate the history of the world and the origin of life timeline.