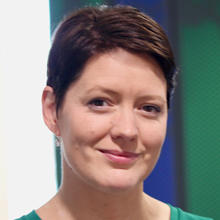 Dr Kate Baker is an Editor for Society Journal Microbial Genomics, with a research focus on genomic epidemiology of enteric pathogens and AMR. Baker is based at the University of Liverpool, where she leads a research group.

Tell us a little about your area of research and your current role.

I’m a Wellcome Trust Clinical Research Career Development and Tenure Track Fellow at the University of Liverpool. I work on the genomic epidemiology of enteric pathogens (primarily Shigella) and antimicrobial resistance, contribute to teaching, and am involved in other activities across the University and beyond.

What encouraged you to pursue a career in the field of microbiology?

Academic careers are full of chance events, so you could argue it’s because I won a PhD studentship from the Cambridge Infectious Diseases consortium, so microbiology it was, but it was more than that – I just followed my interests. I studied biochemistry during my Biomedical Science training, but it wasn’t for me. Then, coming out of my veterinary degree, I loved epidemiology and public health, and I’ve always been fascinated by evolution, so maybe it’s not surprising I’ve ended up in bacterial genomics!

Can you tell us about your biggest professional achievement(s) so far?

This is a toughie – it’s all been great in so many different ways.

Our works on the global transmission and drivers of sexually transmissible shigellosis among MSM has been a real highlight. (And a success story from being part of the society!) We had worked on a UK outbreak, and while presenting preliminary work at the Annual Conference met a new collaborator who allowed us to take the story global. It’s been really important for shaping our view of the disease and contributed to a decision to update treatment recommendations.

Being a part of WTAC microbial genomics training programs that have helped build capacity in new areas, particularly Latin America, was a real honour.

Also, the studies on historical bacterial isolates have been a real privilege – realising the hopes of those people that had the foresight to store them. I remember after finishing a body of work on the isolates of the late, great microbiologist G.E.D. Murray I was so touched to receive an email from his son R.G.E. Murray thanking me for the work we’d done on his father’s isolates, and that meant a lot to me.

And honestly, having my first lab group meeting was a massive highlight – a real sense of achievement at finally having got that far, genuine excitement about what was to come scientifically, and just a real honour to now have the chance to help other young scientists shape their careers.

How did you decide to transition from being a veterinarian to focusing on research?

It was more a matter of transitioning back to research. I wanted to do research since secondary-school and originally registered for Biomedical Science but switched to Veterinary Science when I got nervous about the shaky career path of academia! Turns out I still wanted to be a researcher though so when the chance to do a Veterinary Science research training summer school came up, I jumped at the opportunity (and had to apply two years in a row!)

How big of a public health risk can AMR Shigella become if not prevented?

As the top bacterial cause of moderate to severe diarrhoea of children in developing nations, Shigella is already a massive public health problem and the mainstays of treatment are supportive care and antimicrobials. Like other bacteria, Shigella are getting more resistant to antimicrobials. But unlike some other important diarrhoeal pathogens, we don’t have a licenced vaccine for Shigella, so the development of AMR Shigella is a real problem. So, it’s really no surprise that AMR Shigella are on the World Health Organisation’s list of priority pathogens.

You recently joined the Microbial Genomics Editorial Board as an Editor. Can you tell us a little more about what this role involves?

A steep learning curve! The Editor’s role is to review manuscripts as they come in and decide, sometimes after the result of discussion, whether the manuscript might be suitable for publication. Then you’re responsible for selecting reviewers and considering those reviews and the manuscript to make a final decision on behalf of the journal. It’s certainly made me more sympathetic about possible delays to publication once an article is submitted!

Why is being involved with the Society journals important to you?

Because my PhD supervisor told me to so I could access the travel awards!

Have you taken part in any activities as a member of the Society?

I go to the Annual Conference most years and have been to a couple of meetings at Charles Darwin House, too, as I was a Microbiology Society Champion for the last couple of years.

Do it! You won’t regret it! I remember feeling pretty intimidated as a young scientist and wish it hadn’t taken me so long to get involved – if you love bugs, this is for you – it’s your society, your community.