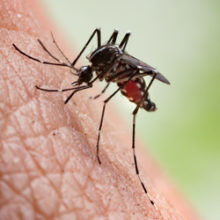 There are concerns that some of the effects of climate change will increase the global burden of disease. Changes to rainfall patterns could reduce fresh water supplies. Lack of water already affects 25% of the world’s population and is likely to get worse in some places.

This will compromise hygiene and health, and lead to the increased incidence of illnesses such as trachoma (an eye infection that can cause blindness) and diarrhoea. Diarrhoeal diseases already kill more than 1.8 million people annually. Higher rainfall in other areas and rising sea levels may lead to flooding which increases the risk of water-borne diseases such as cholera. The bacterium which causes cholera thrives in warmer water.

Floodwaters also provide breeding grounds for disease vectors such as mosquitoes. Mosquitoes are also sensitive to temperature change. If their habitat becomes warmer then their rate of reproduction increases, as does the number of bites and consequently blood meals they take. Warmer weather also extends their breeding season and reduces the parasite incubation rate. As a result, the incidence of diseases such as malaria and yellow fever could be affected. Mathematical models which look at the relationship between climatic variables and biological parameters such as biting rates for disease have shown that a 2–3°C rise in temperature would increase the number of people affected by malaria by approximately 3–5%, which equates to several hundred million people in the world.

Changing weather patterns also influence agriculture: increasing temperatures and more variable rainfall may reduce crop yields in areas like sub-Saharan Africa. This could lead to malnutrition which is a significant factor in complications arising from infectious disease.

It is not just humans that are affected by climate change; both plants and other animals, wild and domestic, are at risk. Bluetongue virus (BTV), which causes bluetongue disease in domestic and wild ruminants, is carried by a midge and transmitted to mammals through a bite. For a long time the disease was restricted to Africa. Since the late 1990s BTV has been spreading north. Some experts believe that global warming has caused an increase in midge populations responsible for spreading the disease. In 2007 the disease reached the UK. Experts believe that infected midges were carried to the UK from the continent on the wind. Animals with the disease experience flu like symptoms along with swelling and haemorrhaging around the mouth and nose. The disease is acute in sheep with high mortality rates – up to 70% of a flock of sheep can die from the virus. If the ruminant does recover milk production is badly affected with major economic consequences for the farmer. There is no successful treatment for bluetongue disease. Animals at risk can be given a vaccine to increase their immunity to the disease.