What are antibiotics and how do they work? 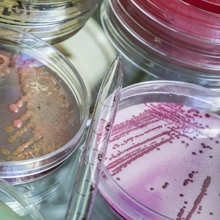 Any substance that inhibits the growth and replication of a bacterium or kills it outright can be called an antibiotic. Antibiotics are a type of antimicrobial designed to target bacterial infections within (or on) the body. This makes antibiotics subtly different from the other main kinds of antimicrobials widely used today:

Of course, bacteria are not the only microbes that can be harmful to us. Fungi and viruses can also be a danger to humans, and they are targeted by antifungals and antivirals, respectively. Only substances that target bacteria are called antibiotics, while the name antimicrobial is an umbrella term for anything that inhibits or kills microbial cells including antibiotics, antifungals, antivirals and chemicals such as antiseptics.

Most antibiotics used today are produced in laboratories, but they are often based on compounds scientists have found in nature. Some microbes, for example, produce substances specifically to kill other nearby bacteria in order to gain an advantage when competing for food, water or other limited resources. However, some microbes only produce antibiotics in the laboratory

How do antibiotics work?

Antibiotics are used to treat bacterial infections. Some are highly specialised and are only effective against certain bacteria. Others, known as broad-spectrum antibiotics, attack a wide range of bacteria, including ones that are beneficial to us.

There are two main ways in which antibiotics target bacteria. They either prevent the reproduction of bacteria, or they kill the bacteria, for example by stopping the mechanism responsible for building their cell walls.

Why are antibiotics important?

The introduction of antibiotics into medicine revolutionised the way infectious diseases were treated. Between 1945 and 1972, average human life expectancy jumped by eight years, with antibiotics used to treat infections that were previously likely to kill patients. Today, antibiotics are one of the most common classes of drugs used in medicine and make possible many of the complex surgeries that have become routine around the world.

If we ran out of effective antibiotics, modern medicine would be set back by decades. Relatively minor surgeries, such as appendectomies, could become life threatening, as they were before antibiotics became widely available. Antibiotics are sometimes used in a limited numbers of patients before surgery to ensure that patients do not contract any infections from bacteria entering open cuts. Without this precaution, the risk of blood poisoning would become much higher, and many of the more complex surgeries doctors now perform may not be possible.