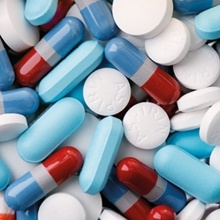 Antibiotics are important medicines for treating bacterial infections in both humans and animals. Unfortunately many of the bacteria which cause these infections are becoming resistant to existing antibiotics. The more we use antibiotics, the more resistant bacteria become.

With antibiotic resistance on the rise, increasing numbers of people die every year of infections caused by bacteria that have become resistant to the antibiotics previously used to treat them. It is estimated that, by 2050, the global cumulative cost of antibiotic resistance will reach 100 trillion US Dollars (USD).

In the 1950s and 1960s new drugs were being isolated all the time. However, the rate of drug discovery has slowed markedly. This lack of effective new antibiotics means that drugs previously set aside as 'reserve' antibiotics, meant to be used only when no other treatment is available, are being used more and more regularly - and resistance is developing to them, too. Some of these reserve antibiotics are also more toxic or have more severe side effects than more standard antibiotic treatments.

Antibiotics Unearthed will enable the public and school, university and college students to join the hunt for new antibiotics in soil. They will take soil samples and be involved in the analysis of them to see if they contain antibiotic producing bacteria.

Soil is an abundant habitat for microbes: it has been estimated that there are 260 billion billion billion prokaryote cells in the soil across the globe. Research on bacteria indicates that one gram of soil contains tens of thousands of species.

Inspiring the next generation of scientists

School, university and college students involved in the project will have the opportunity to design and carry out their own research project to hunt for new antibiotics in soil. By taking part in ‘real research’ students will experience what it is like to follow a scientific career, something that rarely happens at this stage in their education. It is hoped that the project will inspire students to carry on with a scientific career.

More information about antibiotics can be found in the following sections: